Innovative Leaders of the Church 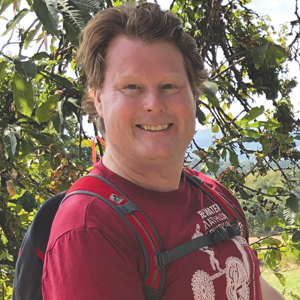 How did you become involved in so many ministries?
I’ve been in ministry for 25 years now. What led me to Metropolitan United Church (Met) was the opportunity to be able to make a big impact in outreach, discipleship and hospitality; these are Met’s three primary principles. Met absolutely shines at that. We asked, where does Met go next? We decided to start a church plant in the eastend of London, Ontario. The idea is to be completely community based.

I teach homiletics at Huron College. That’s of course for people studying for ministry, but we’ve opened it up for lay worship leaders. At the Centre for Practical Theology we run a worship lay school. I’m completing a PhD at the University of Ottawa in human kinetics. I’m with people studying kinesiology, and sports administration. My classmates study how Olympians sleep and how your knee moves. They ask me, what do you study Jeff? Jesus.

How does a PhD in human kinetics connect?
The department of Human Kinetics houses Recreation and Leisure Studies. I’m doing a PhD in leisure. I study what people do in their free time; worship, volunteering and leadership often is done in your free time. I’m trying to learn more about that. It’s part of the Centre of Practical Theology; what do people use their free time for, and how do we make it meaningful so that people flourish.

How are your ministries involved in the community?
The Met congregation is almost 200 years old. We have a presence in London. Met started the Poverty Coalition a decade ago. We were leaders with the Syrian refugee families, helping to begin the process with the city. Met has a meal every Friday night, people can all come to eat. We have a program called MCAMP, a free music and arts camp for kids. They learn to read music; we’re trying to give them skills. Some of the kids have now graduated and are going to university for music. We have a legal aid clinic at the Centre for Practical Theology. And we’ve been working with Cross Cultural Learners. Cross Cultural Learners helps people who are learning English for the first time or preparing for their citizenship exams.

What would you say is your calling through it all?
For me, I find that the calling is the community, partnerships, and the connections. I know it sounds cliché, working together. When you look and see what it is that we are really being called to do, and others start to draw around you, the energy is incredible. Often all we need is someone just to say, “Ok, let’s talk” or “Can you imagine?” Then you write a grant, or get some resources, or just simply start doing. It’s really powerful. 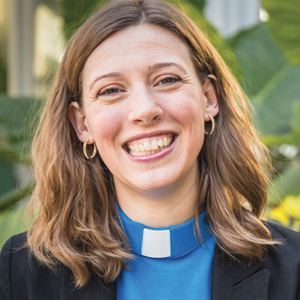 What was the journey that brought you to ARISE?
My journey started at VST, actually. I asked to do my first placement in Vancouver’s Downtown East Side. At the time I still felt called to congregational ministry in a suburban setting. Suburban congregations need to be aware of, engaged, and attentive to inner-city issues. They need to be able to support the inner-city missions in the communities closest to them. What better way to learn about inner-city missions than Vancouver’s Downtown East Side. I did my first-year placement at First United Church Mission. Every Friday I went to First United. Part of my role was to participate in facilitating their foot care program and wash people’s feet. I don’t know if there is a way to wash people’s feet every week and not be impacted by that.

In between my second and third year at VST, I did a summer placement at the Yonge Street Mission Evergreen Center for Street Youth in Toronto. At the time I was really not sure where God was calling me in terms of ministry. I went to Evergreen, and within the first week decided this is where God’s calling me to be. I had a very profound experience supporting a young woman. She had been exploited at a very young age and that really impacted me, it got to me and broke my heart. I spent a lot of the summer reflecting. Needing to make sense of that experience, working with young women who are street involved, and needing to respond. I got hired by Evergreen before I even finished at VST. I started between finishing classes and graduating. A more focused sense of calling emerged to work with individuals who experience sexual exploitation or are involved in the sex trade. As various changes happened at Yonge Street Mission and the Evergreen Centre for Street Youth, I felt my time was coming to a close and about a year later ARISE began with the support of the Presbytery of East Toronto.

What is ARISE?
Arise began in the fall of 2013 as a mission of the Presbytery of East Toronto in the Presbyterian Church in Canada. We offer outreach, case management and spiritual care to individuals who are or have been involved in the sex trade.

Can you share a story of impact?
A story I frequently draw on is that of our peer support worker, Angel Power. She is a survivor of trafficking and when she started with ARISE she was very much impacted by that. It had recently happened, and she was trying to bring charges towards her trafficker – which she was successful in doing. There was a lot of trauma and a lot she was struggling with. There would be times when Angel would make appointments, then something would happen, and she wouldn’t show up. She would feel embarrassed about not showing up. At times a couple weeks, or a month, would pass before we saw or heard from her again. Over time Angel learned to trust that we weren’t judging her; that we were going to be here for her and that we were going to offer her support. In time, the relationship grew.

Part of Angel’s way of processing trauma was to write poetry. Her dream was to have her poetry published. I was preparing for a speaking engagement for ARISE, and Angel had shown me a new poem that spoke to what she was processing and what she had experienced. I asked, “Would it be ok with you if I shared this poem?” She answered, “Oh yeah, that would be amazing. Please do that.” I shared Angel’s dream to have her poetry published and somebody came up to me after the event and said they could help with a small batch publishing of Angel’s poems. We would get together, arranging pieces of poetry and editing them. It really set fire in her. They did a small run of 25 books. Seeing her poetry in print really motivated her.

Her book of poetry is called The Darkness and The Light. The Darkness talks about the trauma, exploitation, addiction, and abusive relationships. The Light is about hope, finding the light, her resiliency, being able to emerge from the trauma, and the support she received in finding hope. When she received her victim’s compensation, she decided to approach a publisher with her poetry and create a new expanded edition because she “now has more poems about the light to add.” We had a big book launch for her. She had a poetry reading, and book signing. Angel often uses her poetry to talk to others about those experiences. She is working on another book that is more autobiographical and narrative. We’re looking forward to supporting her. Not long after the release of The Darkness and The Light, we hired her on staff as a peer support worker. It’s been really amazing to see the whole journey. It’s been an honour and a privilege to journey with her. Her book of poetry is available on Amazon.