When did you come to Crossroads United Church?
I was called to St. John’s Strawberry Hill United Church in 2003. In 2009, I was part of the amalgamation process that brought the two founding congregations together that formed Crossroads United Church – St. John’s Strawberry Hill United Church and Royal Heights United Church. When I started at Strawberry Hill, I had two girls, a three-year-old and a five-year-old. Sometimes I wouldn’t get home until after an evening meeting. I would lean over them in their beds and they would say, “Ewww mom, you smell like the church.” People have always been very welcoming, but both of the buildings were tired and done. We sold the Royal Heights building and deployed that money into the new building as well as ministry. We knew we needed to rebuild in terms of our presence and mission in the community and not just the building.

Can you talk a little about the amalgamation of St. John’s Strawberry Hill and Royal Heights?
All the literature says that doing an amalgamation with two congregations is one of the trickiest things – there is a built-in us-vs-them turf war. But we had been co-operating since the summer of 2004 on a vacation bible school. It was such a pure beautiful ministry. People said, “Yes, we can do stuff together. Maybe we can do better stuff together than we can apart.”

There was a sense that linking two leaky boats together was not going to create something that floats. We needed to seek a vision for what that ministry would be. A project leadership group was formed and a visioning process created. We used the metaphor of “Into the Wilderness” for a year.
The leadership group hosted an event for both founding congregations at the Anglican church, which was halfway between the two congregations. We sought an outside facilitator to guide us through a process and at the end of the day people said, “God is really going to do something.” That moment really turned the corner in an emotional-spiritual kind of way.

We wrote our first vision statement following that event: “We will be an inter-generational community following Jesus Christ moving with the Holy Spirit inviting and welcoming the stranger and practicing faithful stewardship of our gifts and resources.” The phrase “inviting and welcoming the stranger” was really controversial. There were people who didn’t like the phrase because they didn’t want to label anyone a stranger; God doesn’t have any strangers. And there were people with more of the prophetic edge who expressed that society makes people into strangers to each other, and there are people who are labeled strangers whether Jesus wants that to happen or not, or whether they’re strangers to God or not, it’s happening all around us. Though there was some real push-back, we did keep it in our vision statement. 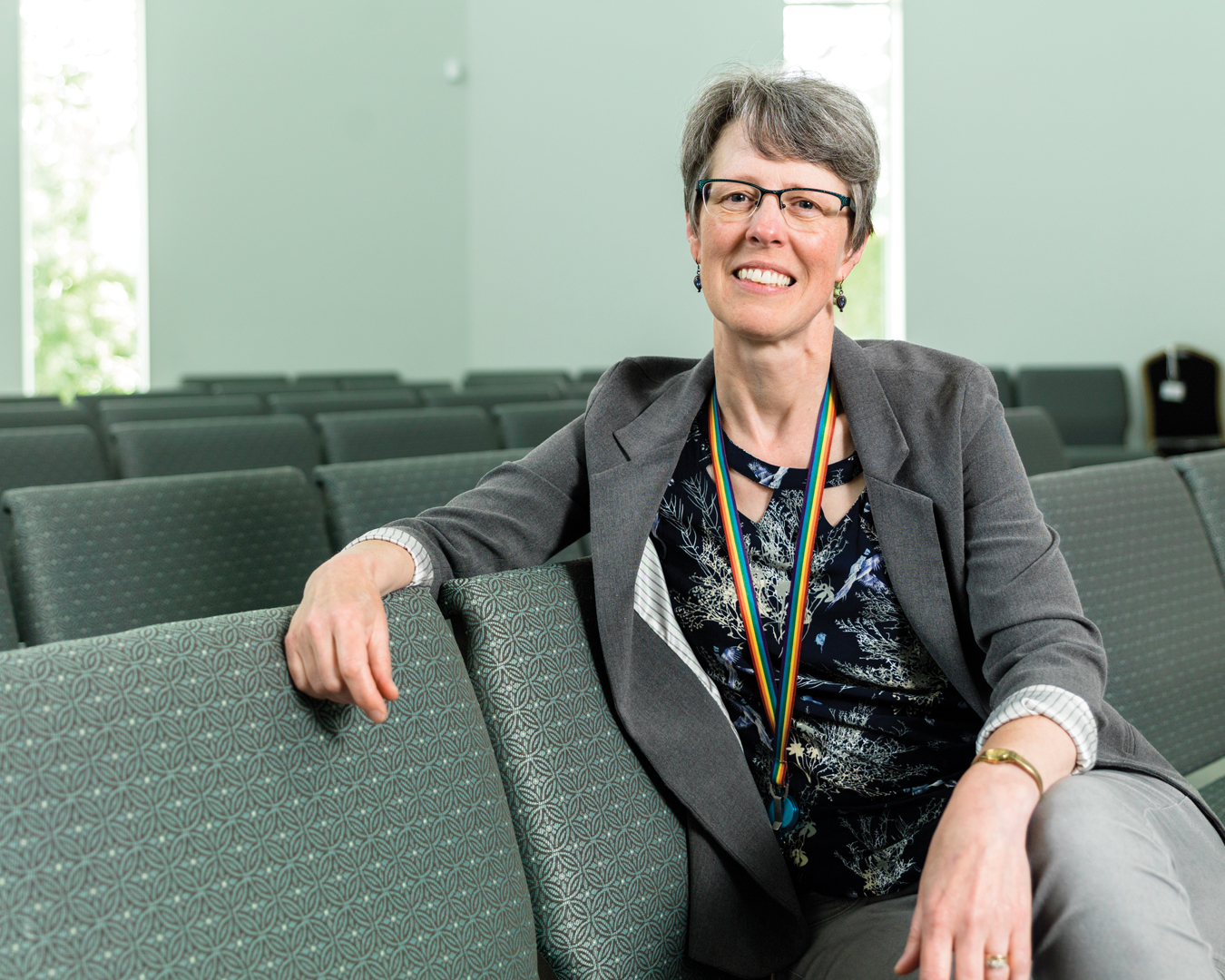 When we got into the affirming redo of our statement, we had a couple of realizations. All the things we aspired to do when the founding churches amalgamated had become reality in the next few years. Another realization was the heresy in the statement, “practicing faithful stewardship of our gifts and resources,” that is wrong. The Earth is the Lord’s and the fullness thereof (Psalm 24:1). Our current statement says, “practicing faithful stewardship of God’s gifts and resources to serve the world.” We were so focused on money, building, resources, and what we were going to do with them. All of it comes from God.

Was the process of becoming an affirming congregation difficult?
It’s so interesting. The thing that had always stopped me in the past was the thought that it was obvious. In 1988 the United Church first said, “Yes, we will ordain gay and lesbian people,” that’s 30 some years ago. We’re past this conversation; why do we even need to say this? But of course, it’s not obvious.

There was some resistance in the congregation too, “Of course we’re affirming, why do we need to go there again?” For others, it was still a dangerous thing to put yourself out there. We just had this year’s vacation bible school, now called Kidventure. The outreach theme was around diversity, hospitality and welcoming one another. We had a pride flag and a trans flag hanging off our front walkway. It was up for the first week of Kidventure, everything was okay. Second week, everything was okay. Our caretaker got to church on the third Sunday, and found the flags slashed. The pride flag, right through the middle. The trans flag was hacked; mostly in one piece, parts of it hanging off. That was deeply upsetting for folks in the community, but also not surprising. Part of the conversation of hanging the flags up was “it is asking for somebody to do something to them.” Well actually, gay and lesbian people, trans people, they are up for that kind of threat all the time. This is part of why we are an affirming congregation. We are coming out as allies and supporters, and we’re going to be in solidarity with these folks.

I was on holiday when this happened. Our affirm team, our acting lead ministry team, and my colleague Gabrielle McLarty handled it. They left the flags up for a week and a half. They changed the sign to say, “LGBTQ flags: $240. Solidarity against hate: Priceless.” It was a great sign. We received a letter in the mail from a gay man in the community that had a cheque for $240 in it, “Please buy yourselves some new flags” and, “thank you.” We’ve been in touch with him and there’s a new relationship. Actually he and his partner had come to one of our blessing the animal services a few years ago. They had just adopted their big cute doggy named Ginger. I have the best job in the world. What an honour to be in the thick-of-it with these folks who are so courageous. We fixed the flags and put them back up.

Can you talk a little about the North Delta Refugee Project?
There was that moment when the body of little Alan Kurdi washed up on the beach, and the whole country got inflamed. People in North Delta were inflamed. The United Church of Canada’s Pacific Mountain Region has a refugee working unit. In October of 2015, we invited a woman named Maggie Hosgood to do a roundtable and talk about what’s at stake, and what would be involved. I invited people through the ministerial. We had probably 20 to 30 people attend. Out of that, four congregations provided members to a small steering committee. I’m the minister from those four congregations who is staffing that project.

It’s been lovely. Our first experience was just beautiful. In January 2016, we were having a meeting on a Monday night – the band was here, the ministry & personnel (M&P) committee was in the library, and Christmas donations were being sorted in the hall. I was with the M&P committee for a moment before going back to the refugee meeting and Bryan, chair of the Maintenance committee, knocked on the door and said, “Cari, there’s a couple of Syrian refugees at the door, can you talk to them?” I came out to the foyer and it was a couple, Rashid and Abeer. Our sign read, “North Delta Refugee Project, Inquire Inside.” Rashid and Abeer had been in Canada for a year, and live right across the street with their two little boys. They wanted to talk to us about sponsoring Rashid’s sister and her family who were sheltering in Lebanon. Her two kids had not been in school for a couple years by then. The North Delta Refugee Project committee had been wondering how to choose who to sponsor, and how to raise the money. Actually, the money was not a problem. We opened up to our four congregations and in it came, it was a beautiful thing.

There were people in the committee who were a little unsure, but we got to know Rashid and Abeer. Then we got to know Suzy and Kefah a little, Rashid’s sister and brother-in-law; not that you really can from that distance, especially as they were living in really tough conditions. The integrity of Rashid and Abeer really moved the committee eventually to say, “The hand of God is in this, this is the family we need to sponsor.” We brought Suzy and Kefah to Canada in mid-February or early-March of 2018.

I tell you, that moment at the airport, everyone on the steering committee who could make it was there. Rashid and Abeer and their boys were there. It was one of the most moving moments in ministry. Watching the two little boys look for their cousins. They were running the length of the barrier at the airport. And then when they saw them, it was like there were no barriers, they’re over the wall, it was beautiful.

Suzy and Kefah have been here for more than a year. Our responsibility to them is complete, and they’ve done really well. He was an engineer, and she was an English teacher in Syria.

What’s your experience as a Field Education site for VST?
Last year, the Crossroads congregation hosted Lydia Ruenzel, a 3rd year VST student, for her field education component. This year she is doing her United Church required Supervised Ministry Experience at Ladner United Church. Before Lydia we hosted Craig Perry (MDiv 2017, VST), and before Craig we hosted Jennifer Swanson (MAPPL 2014, VST). Jennifer was the children and youth ministry person who worked here, and covered my 2012 sabbatical by doing a Field Ed block with Edith Baird supervising her. Edith is a retired minister and VST grad as well. Through all of the placements, the congregation said “We’re good at this. We’re a good place for students to learn. We need to be doing this.” I reached out to Steven Chambers, VST’s Theological Field Education Acting Director, in the spring to say, “[Field Education] is a gift that this congregation can offer to the church, to the wider Church.” Hosting theological students is a partnership between VST and the congregation. It contributes to the theological formation of both the student and the congregation.

Christian formation is the bigger category: how we practice the faith together to form people in this particular way of being, that offers an alternative witness in the world. Whether we accomplish everything we set out to do, that’s almost beside the point. Though, of course, it would be great if we did. But are we offering a faithful witness? Does the testimony we offer by our very being, the things we choose to do, how we speak and how we relate to one another reflect the Gospel? That’s not something you only learn in your head.

Rev. Cari Copeman-Haynes has offered spiritual leadership to the Crossroads congregation since its formation in 2009. She is currently the Past-President of Pacific Mountain Region, having offered significant leadership to the church during its recent structural changes. Prior to Crossroads, Rev. Cari ministered with St. John’s Strawberry Hill (03-09) and Gilmore Park (98-03) United Churches, as well as Park United Methodist Church (New Jersey) and St. Andrew’s-Wesley United Church (Vancouver). She has a Bachelor in Music from the University of British Columbia and an MDiv from the Vancouver School of Theology.