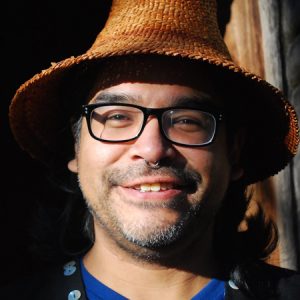 Wal’aks (Keane Tait) is a noojit (two-spirit, non-binary person) from the House of Axdii Wil Luu-Gooda & Ksim Xsaanof the Git-Wilt’uuts’kwhl Aks Clan of the Raven/Frog tribe among the Nisga’a People. Wal’aks recently returned to their homelands in K’alii-aksim Lisims (Nass River Valley) from living in Vancouver. They are a Knowledge Holder and fluent in the Nisga’a language with over twenty years’ experience in language and cultural activism. They have been teaching the Nisga’a language at the Native Education College and the Nisga’a Ts’amiks Vancouver Society for over six years, where they continue to develop innovative pedagogical strategies to revitalize the Nisga’a language. From childhood they were taught the traditional values of their culture and the oral history of the Nisga’a Peoples by their mother, many aunts and uncles, late grandmother Addie Tait, and late grandfather Tom Tait. Wal’aks began learning Salish weaving from internationally renowned Musqueam weaver Debra Sparrow and is now an accomplished Gwiis Maakskw (northern geometric / raven’s tail) weaver. Wal’aks challenges gender role expectations and nourishes the gifts they were given by Creator in their language and their woven and dance works of art.