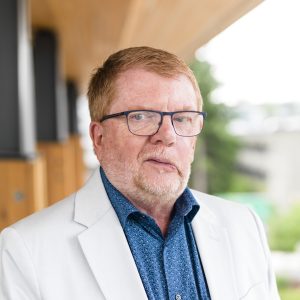 The Rev. Dr. Steven Chambers, a minister of The United Church of Canada for over thirty years, is currently partly retired, partly doing a bit of work in ministry that calls to him, and partly co-parenting two teenage daughters. His current research interest is in the area of ecclesiology, specifically the history and development of ministry in the United Church.

In addition to ministry at United Church congregations in Ontario and Vancouver, Steven served as General Secretary of the United Church’s Division of Ministry Personnel and Education and then as Executive Minister of the Faith Formation and Education Unit overseeing the church’s national work in multi-age faith formation and the preparation of people for lay and ordered leadership. As the United Church’s officer for theological, doctrinal and biblical matters, Steven staffed the Committee on Theology and Faith, which produced A Song of Faith (2006). He was the national staff person responsible for relationships with Canadian Forces Chaplaincy for several years.

Steven has had extensive involvement in developing ways to express partnership in God’s mission, especially in cross-cultural contexts. He has taught in the area of mission, ecumenism and the polity and doctrine of the United Church both at Emmanuel College, Toronto, and the Vancouver School of Theology. His doctoral thesis, The Partnership Conversation, ‘listened in’ to ongoing conversation between two congregations which entered a ‘twinning relationship’ – St. James United in Simcoe, Ontario, and Webster Memorial United Church in Kingston, Jamaica.