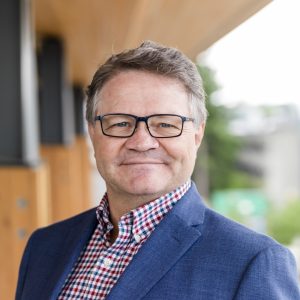 President and Vice-Chancellor | Professor of Studies in the Reformed Tradition | Board of Governors | VST Foundation (ex-officio) | President, VST USA Foundation

Richard Topping received his Bachelor of Arts degree in Religious Studies from University of Waterloo, a Master of Arts in Theology from St. Michael’s University in the Toronto School of Theology and a Doctor of Philosophy in Theology from Wycliffe College, where his thesis Director was Professor John Webster.  His doctoral thesis focused on theological interpretation of scripture in Hans Frei and Karl Barth.

Richard was Minister at Zion and Knox Presbyterian Churches in Muskoka, Ontario from 1993-1996 and at the Church of St. Andrew and St. Paul in Montreal, Quebec, where he was Assistant Minister from 1997-1999 and Senior Minister from 2000-2009. He has written or coauthored a number of documents for the Presbyterian Church in Canada, including a Catechism for Today (2008) and Together in Ministry (2006). He currently serves on the Church Doctrine Committee for the national church.

Richard taught at Presbyterian College (2001-2009) in the Montreal School of Theology at McGill University in the areas of Preaching, Pastoral theology, Introduction to Ministry and Church, Ministry and Sacraments.

Richard holds the St. Andrew’s Hall Chair in Studies in the Reformed Tradition and has been the Principal of Vancouver School of Theology since 2013. He teaches in the areas of Introduction to Theology, Reformation History, Christian Spirituality and Reformed Theology of the 19th and Twentieth Century. He has published in the areas of theological hermeneutics, homiletics, philosophy of religion, systematic theology and the theologies of John Calvin and Karl Barth. He has edited a collection of essays, for the 500th anniversary of the birth of John Calvin, Calvin @500, and is currently editing a series of faculty essays with Profs. Ashley Moyse and Harry Maier, Theological Ten Percent, which are an introduction to theological study. He is also working on a book which examines the role of the imagination in postmodern theology.

Richard initiated a Karl Barth reading group which has been active now for 11 years. He is a regular preacher in the Vancouver area and lecturer across the country in the areas of pastoral leadership and strategic direction.

What makes you passionate about teaching?
I especially enjoy when students move from learning the language of faith and theology to using this language to interpret the world. Through engagement with Scripture, theology and the history of interpretation, students have their imaginations funded with a vision of the world that God is bringing through Christ in the power of the Spirit, and begin to live toward it and witness to it. I love students who are brave enough to follow where the vision of the world God is bringing leads them. I see my work as an analogy with the tour guide on the Maid of the Mist boat at Niagara Falls. You can talk about volumes of water, erosion and how the falls have moved over time, glaciation, etc. But the closer you move to the reality of Niagara Falls on the boat the less the tour guide matters. The closer students move toward the reality of God, not just learning about God, but experiencing awe of God, the less the tour guide matters.

The future of theological education?
I think the future of theological education is all tied up with its subject matter – God. I agree with Karl Barth who said that ‘theology is not anthropology in a really loud voice.’ There is no doubt that theology and theological study always takes place in a specific context done by particular people. I worry, however, that we sometimes get so preoccupied with our time, our place and our history that we eclipse discussion of our God – Father, Son and Holy Spirit – who condescends in love to communicate to creatures and invite them into fellowship.  John Webster says, “Contemplation is rapt attention to God the cause of all things rather than to the things of which God is the cause.” The object of Christian theology is twofold: God the Holy Trinity and all others things relative to God. I think if we envision theology in this fashion we might have things to say that will prove interesting and that people don’t already know from elsewhere. I think that the most boring conversations are between people who agree about everything. Christians – because of the in-breaking mercy of God in Jesus Christ – imagine that our fundamental context is “before God” and everything else in relation to that.

Current Academic Projects?
I am currently writing in the areas of the theology of John Calvin and human rights, theological education and its relationship to the university context in which most mainline seminaries find themselves and a book on theology and imagination.

What challenges do students face today that may represent new challenges with respect to changes in practices of education?
I think a main challenge that students and theological schools face today is the challenge of formation for ministry. This challenge is the result of two changes in our student body. First, we have more part-time students. This is because students continue to work while in school to avoid the accumulation of debt.  Second, we deliver theological education at a distance. Students are able to participate in learning through Adobe Connect both live and via recording. This saves students the considerable expense of moving to Vancouver with their families. The result of these changes is, however, fewer students are on campus where the rhythms of prayer and leadership are instilled.  We do require that all students take at least some classes on campus and we offer a number of courses in intensive and retreat format to compact the time commitment. Students can come to Vancouver for these short periods of time to participate in such courses. We will need to continue to be vigilant in the matter of formation for ministry. We have raised funds to assist students for short term stays in Vancouver and scholarships are a means to fuller-time theological study on site. We will continue these efforts.

What gives you hope for the church?
I have great hope for the Church of Jesus Christ. I agree with my friend Will Willimon who says that because God raised Jesus from the dead, “Christians are prisoners of hope.” I understand that the church in Canada has undergone decline. The church that we have now is not the church that many of us baby-boomers grew up with. However, God is sending us students now who have never known Christendom and they have things to teach us. I find that they know how to communicate with their contemporaries about faith and life without having most favoured religion status. They don’t spend much time lamenting loss since they have never known anything but marginal status for the church in our culture. We are trying to teach these students carefully. We don’t want to educate their ability to relate to their friends out of them. We want them to leave with deep formation in Christian faith so that they can improvise (witness and work and lead) for the sake of the church and the world. Some of them are from countries where the church is growing by leaps and bounds, and they have things to teach us.

What advice or guidance would you give to students thinking about coming to VST?
Please do not assume that you cannot afford to come and study in Vancouver. We have multiple support options. Ask us about possibilities. Tell us what you need. Many students have tested their calling at our school. Sign up for a course and discern whether this is where you need to be. Call me; I would love to speak to you about your sense of call and theological education (604-822-9808). The church requires outstanding leaders just now.  Leadership in the church for the love of God and the sake of the world is worth your life. Imagine you could have a front row seat to see some amazing life transformations, you could witness baptisms ‘take’ in human lives, you could help mobilize the church to bear witness to the kingdom that is coming on earth as it is in heaven.