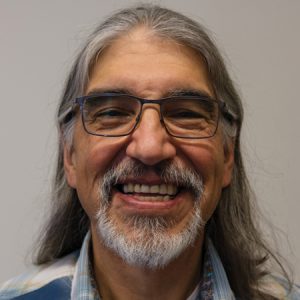 Reverend Doctor Ray Aldred is a husband, father, and grandfather. He was first ordained with the Christian and Missionary Alliance in Canada and is now ordained with the Anglican Church of Canada. He is status Cree from Swan River Band, Treaty 8.  Born in Northern Alberta, he now resides with his wife in Richmond, British Columbia, Canada.  Ray is the director of the Indigenous Studies Program at the Vancouver School of Theology whose mission is to partner with the Indigenous Church around theological education.

Formerly Ray served as the Assistant Professor of Theology at Ambrose Seminary in Calgary, Alberta. He is a former chairperson and board member for Indigenous Pathways. He is former Director for the First Nations Alliance Churches of Canada, now a committee member, where he works to encourage Indigenous churches. Ray also has had the privilege of addressing several college conferences and meetings.  Ray’s passion is to help as many as possible hear the gospel in their heart language.

Ray and his wife, Elaine have also been involved in ministry to help train people to facilitate support groups for people who have suffered abuse.  Also, Elaine and Ray have coordinated Marriage Encounter.  Ray and Elaine have four adult children, Jenny, who has graduated from the University of Regina and the Alliance University College, a school teacher, is married and lives in Richmond, British Columbia, Canada; Raymond, who is pursuing a PhD in Philosophy at McGill University; Catherine, has earned an MA in Religions Studies at McGill University; and Rueben who works in the Oil Field in Northern Alberta.

What makes you passionate about teaching?
To draw out what is within students.

What inspires you about teaching at VST specifically?
The opportunity to be involved in the training of clergy for the Church.

What kind of student do you love having in your class?
I appreciate all kinds of students, and I want to be in cooperation with them and their community to further their education.

Current academic projects?
Chapter for a book on Soteriology for Eerdmans.

What do you see the future holding for you in your academic profession?
To help make education more accessible to Indigenous communities.

What challenges do students face today that may represent new challenges with respect to changes in practices of education?
The world is always pushing education to be faster, easier, and less expensive, but the development of character takes time, effort and investment. The learning community is trying to engage that tension.

What gives you hope for church?
The hope of the Church is the triune God. God with us, Father, Son, and Holy Spirit.

What advise or guidance would you give to students thinking about coming to VST?
Come away for a time and lets share our hearts and as we do, we will find that we have all been enriched by the journey.