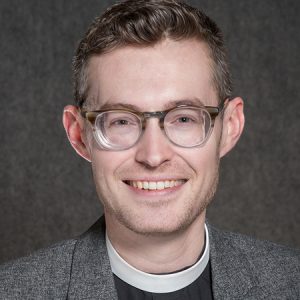 Nathan LeRud is the Dean of Trinity Episcopal Cathedral in Portland, Oregon, the oldest Anglican congregation in the northwestern United States. He fell in love with musicals at age seven when taken to see a college production of Camelot. He memorized every note of the original cast recording and (as a boy soprano with freakish range) learned to sing all of Julie Andrews’ numbers. A double major in English and Theatre, favorite roles include Tevye in Fiddler, Pangloss in Candide, Mabel Swindle in Radio Gals and “Dean LeRud” in Trinity’s recently-produced spoof of The Book of Mormon, “The Book of Common Prayer.” Nathan holds a BA in English and Theatre from Whitman College in Walla Walla, WA and an M.Div from the General Theological Seminary in New York City.