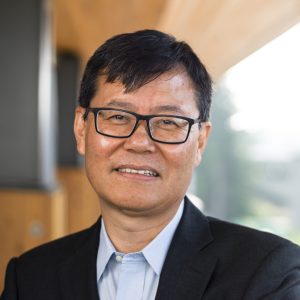 Hyuk writes that his family name is Cho, which means “nation (趙)” and his given name is Hyuk, meaning “shine (赫).” His parents’ hopes and dreams are embedded in his name. He keeps these thoughts in his heart and carries them on his faith journey. His spiritual roots probably reach deep into the blue oceans surrounding the Island of Docho off the southwest coast of the Korean Peninsula from whence the fishers and farmers raised their children during the bitter years of the Japanese occupation followed by the American military dictatorship and colonial culture. He grew into adulthood during the democratic movement for the unification of Korea. In his university years, he was deeply influenced by Korean liberation theology, minjung theology. Here in Canada, he has been trying to imagine and live out a Canadian version of it. He is currently preparing a monograph on intercultural theology and ministry. His research interests include: the history and theology of the United Church, inter-religious dialogue, missiology, ecumenism, pneumatology, and liberation theologies.

Hyuk’s most recent pastoral charge has been West Point Grey United Church, Vancouver, BC. where he served the congregation since 2018. He brings rich pastoral experience from various pastoral charges such as Toronto Korean and churches in Southwestern and Central Ontario. He is looking forward to sharing persistent hope in times of discouragement, daring faithfuflness when overwhelmed by disinformation and radical love to embrace differences. He is encouraged to share his pastoral experience and passion for theology relevant to the joys and pains of discipleship and to strive to learn with the thoughtfully engaged and generous Christian leaders at VST. In his leisure time, he loves working with wood and is currently building a West Greenland Kayak with Alaskan yellow cedar and carving paddles from Western red cedar.