Lydia Ruenzel
Samuel D. Chown Memorial Prize in Divinity
Awarded at year-end to the graduating student having the highest 1st class standing in the M.Div program.

Katherine Walker
Henreitta DeWolfe Prize
Awarded at year end for the highest standing in courses dealing with Mission of the Church.

Lauren Sanders
Ethel Ruth Erb Bursary
Awarded at year end to a student who shows special promise of all round proficiency in ministry or pastoral work.

Sophie Call
Runnalls Award in Church History
Awarded at year end to a student with an interest in church history.

Shelley Worthington
John C. Sibley Prize
Awarded at year end for a book prize for highest standing in the courses dealing with the Church and Society.

Murray Pruden
W. Evan and Christina J. Fullerton Awards Fund
Awarded at year end to a graduating student about to be ordained.

Jason Wood
Fran D. Whitfield Award in Music and Community Life
Annually, to a student who has enriched the community life of the school—especially through the sharing of their musical gifts, for example, through worship leadership.

Katherine Walker
Lloyd Gaston Memorial Fund
To be granted annually to the student who, enrolled in any program at VST, submits the best paper in any discipline of New Testament Studies.

Samuel Andri
Lockhart Award
In appreciation for the preaching and pastoral leadership of The Reverend’s Laura and Ross Lockhart, this award is given to a student preparing for Ordained Ministry who demonstrates homiletical promise and gifts of pastoral care.

Martin Pommerenke
The Rev. Dr. Robert Robinson Morrison Prize
Awarded to a student with the highest standing in New Testament studies or Homiletics.

Janet Eastwood
The George R. Gordon Prize
Awarded to a student with the highest standing in Biblical History or Literature.

Lydia Ruenzel
The Angus MacMillan Grant Prize in Preaching
Awarded to a student for proficiency in expository Biblical preaching or preaching on a Biblical subject. 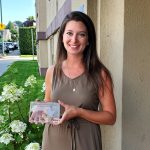 Shaunna Kubossek
The Frederick Buechner Award for
Excellence in Writing
Awarded to a student for excellence in writing.

Stephen Bell
The Rev. Dr. Hans and Colleen Kouwenberg Award in Pastoral Ministry
For a graduating Presbyterian student at SAH/VST demonstrating excellence in potential for church leadership in the PCC.

VST thanks the many donors and partners who make these awards possible with their generous support.