Carved and designed by Master Carver Jack La-Sah Timothy, he calls the totem pole “ ALL MY RELATIONS”. Jack La Sah Timothy is a carver and artist from the Sliammon First Nation, near Powell River. His work can be seen Powell River B.C. Sea Walk viewpoint, Inland Lake trial, Bliss Landing Estates and throughout numerous private homes around the lower mainland and the world.

The VST pole is built from a White Pine – 14 feet tall. The six main figures on it are:

There are figures in the eyes that depict the “past, present and future.”

At first he had a creative block as to how to depict that so he slept on it and had a dream. The dream is about a grandfather and his grandson. Traveling together after a 5-day potlatch held in their village. This timeline takes place before contact of Europeans. They went to one of their favorite beaches to have lunch. There was a spot near the beach with a large field there they started a fire. While starting the fire the grandson asked, “Grandfather, will our people still be singing songs, dancing telling stories and laughing like we do, in the future?”

The grandfather picked up his grandson and with a smile he said, “I don’t know. Maybe some day someone will have a vision and tell us about it.” The fire was just getting started with a large amount of smoke and grandfather went down to the canoe to get lunch while the little boy tended the fire. The smoke was thick but in the center of it above the fire was a clear circular area that the smoke didn’t cover it. The little boy was very curious and looked closer at the clearing as he got closer he thought he could see something in the clear circle. He peeked in closer for a better look and unknowingly peered into the future and was looking at “2004”. He had seen the twenty foot totem pole being raised and songs and dances for the ceremony were taking place, he seen the people all around some laughing and talking among themselves. The people he saw were the Sliammon First Nation raising the totem poles that Jack La Sah Timothy carved for his people and the Township of Powell River. 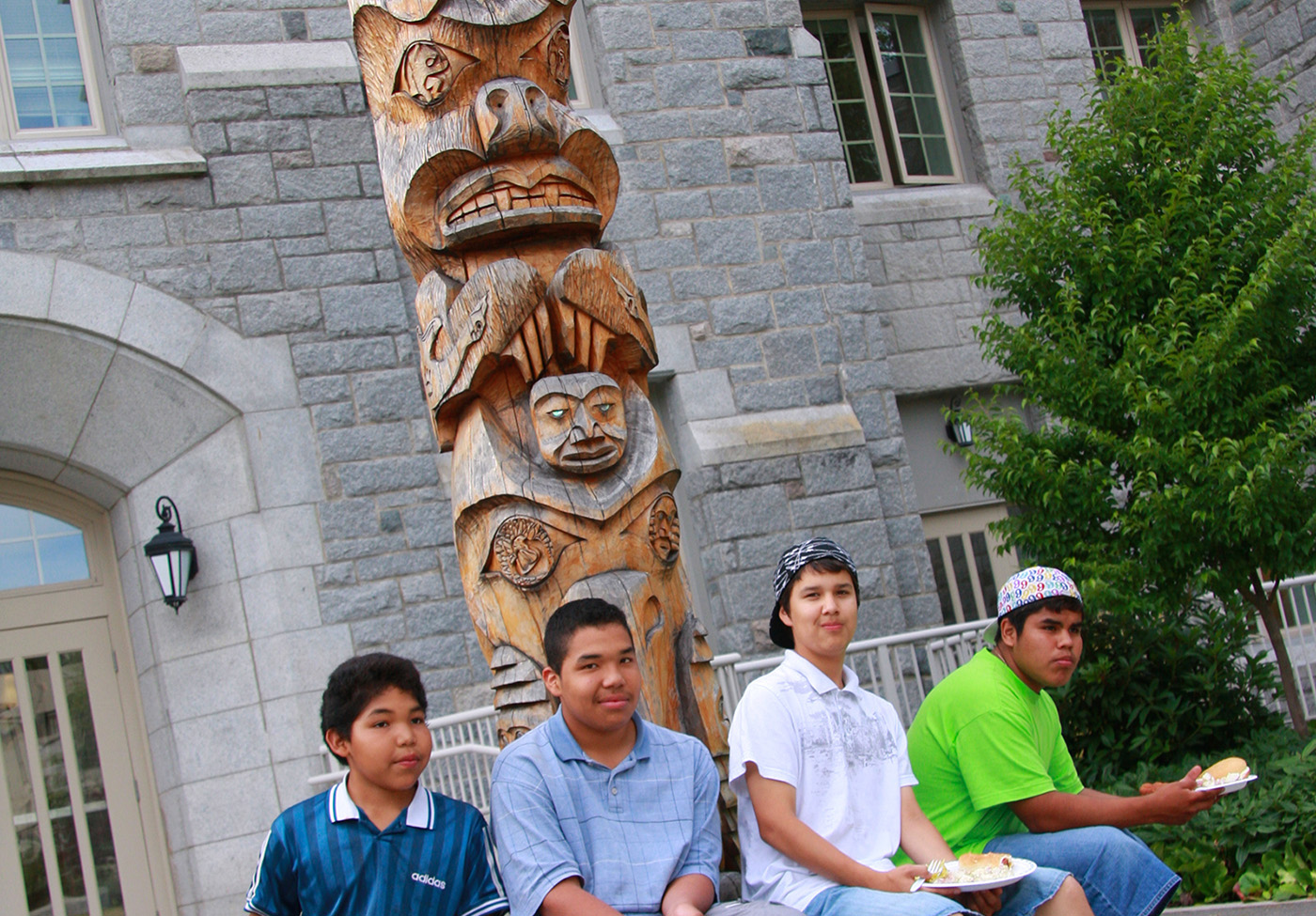 The 14ft. White Pine totem pole with it’s six main figures, raven holding the moon, salmon, frog, grizzly, Chief and eagle was the inspiration for the twenty foot totem poles you will see at the Sea Walk View Point in Powell River. In the eye of the Raven, Bear and the Eagle you will see human figures peering out from the past all with abalone inlay in their eyes. The Bear’s ears have figures within also. The top figure is the raven and within his eyes are human beings. In the grizzly bear’s eye you will see a grizzly bear, protecting and growling. The other eye is a dancer, doing the grizzly dance. In the eagle eyes are the eagle soaring and a human figure, which inspired the “past, present and future” designs. Within all these are twenty-five other figures with abalone inlay in the eyes.